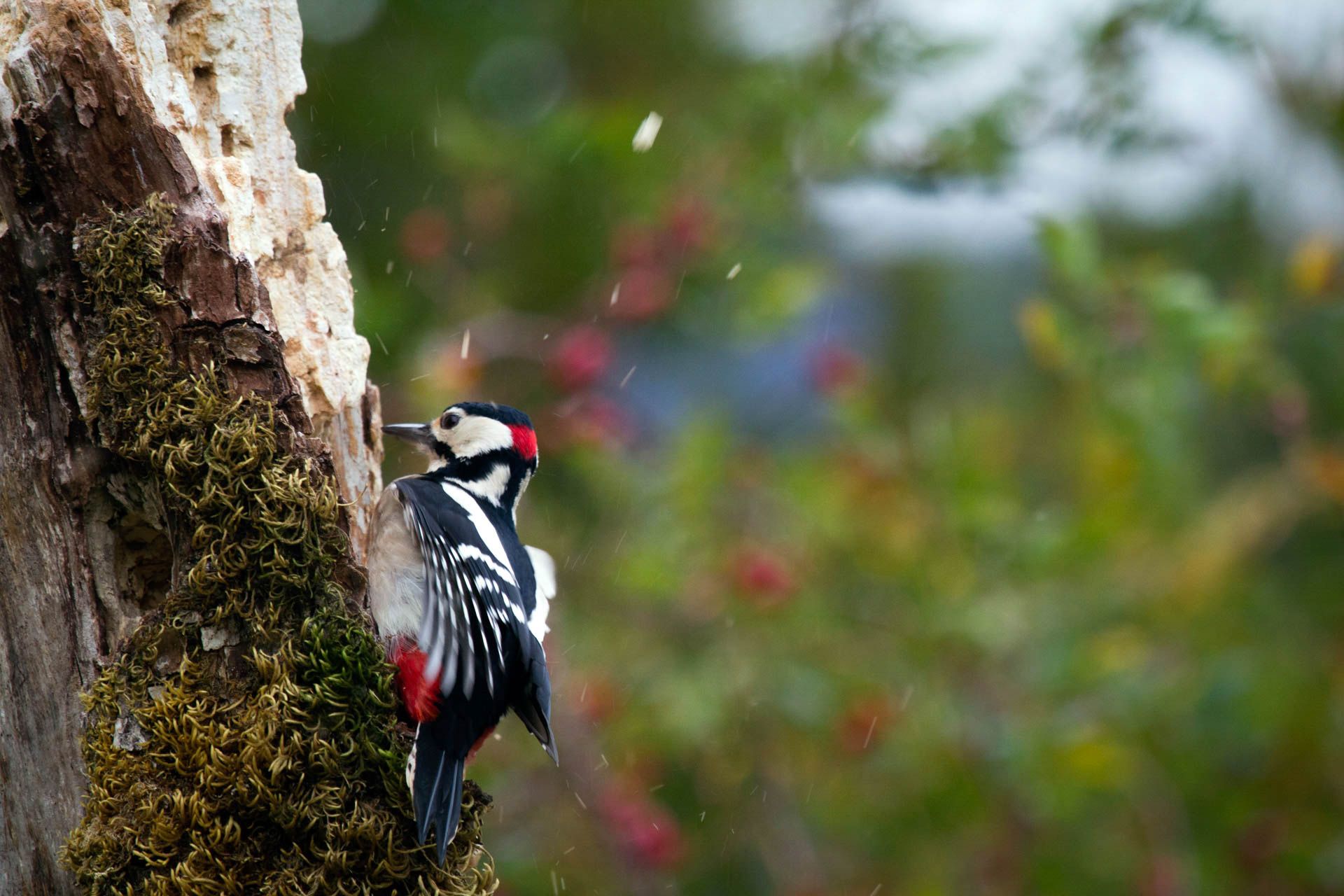 When you enter a beech forest, your first impression may be of a dull and scarcely populated environment. But if you look closely, you will discover a true treasure trove of biodiversity. The silence of beech forests – especially in spring – is broken by the several songs of the birds inhabiting them and by the other sounds and noises of the wildlife.

A characteristic sound you can listen to in beech forests is the woodpeckers’ “drumming”, the rhythmic sound of their beaks pounding on trees, used to communicate or to identify each other.

In the forests of the Apennines, the most common species of woodpeckers are the Eurasian Wryneck and the Eurasian Green Woodpecker, which can also be found in the agricultural environments of the plains and the hills, while the most characteristic species inhabiting the forests are the Great Spotted Woodpecker and the Lesser Spotted Woodpecker, also present in young forests or in the woodlands along the rivers.

Two characteristic species of the old-growth forests of the Central and Southern Apennines are the White-backed Woodpecker and the Middle Spotted Woodpecker, rare and difficult species to see – especially the former – associated with mature beech forests. Finally, the biggest European woodpecker is the Black Woodpecker, which drills large holes in tree trunks to hunt for ant larvae or to build its nest.

Woodpeckers are particularly important for forest environments: they represent “keystone” species, that is species having a great impact on the diversity of their ecosystem thanks to the ability to excavate cavities in the trunks of the trees! In fact, the forest animals which need natural cavities for reproduction purposes are dependent on the presence of keystone species such as woodpeckers, whose disappearance would cause an ecosystem simplification.

Woodpeckers are “primary cavity-nesting species”, because they are the only species able to create its own cavities for reproduction purposes. These cavities can then be reused by “secondary cavity-nesting species”, including several birds and mammals which are not able to create their own cavity. There are also “weak cavity excavators”, which can excavate their own cavities, but also use cavities created by other species. The result is a hierarchical structure in which some species partially or totally depend on others and on a limited number of natural cavities, as well as on a complex system of relationships and competitive behaviors among the various species involved.

For instance, it frequently happens that the biggest species are forced to look for adequately-sized cavities: for this reason, the Black Woodpecker – the species excavating the biggest cavities in Europe – can be considered a keystone species for the forest ecosystems.

Moreover, trees with cavities excavated by woodpeckers represent not only a night shelter for several species, but they often allow the reproduction of several other species of birds and mammals, such as dormice, squirrels, bats, beech martens and pine martens, and the settlement of social Hymenoptera, including bees. Throughout the year, the cavities are also very useful for the storage of food supplies by some species having this habit and, when they are flooded by rainwater, they represent a water reserve used by an incalculable number of animals in all periods of the year.

Woodpeckers also play an important role in wood decomposition processes and are often called “ecosystem engineers”; what is more, they are valid indicators of the good health of forests. The protection of their nesting sites – and, more in general, the protection of hollow trees – has a positive impact on the conservation of the biodiversity of our forests.