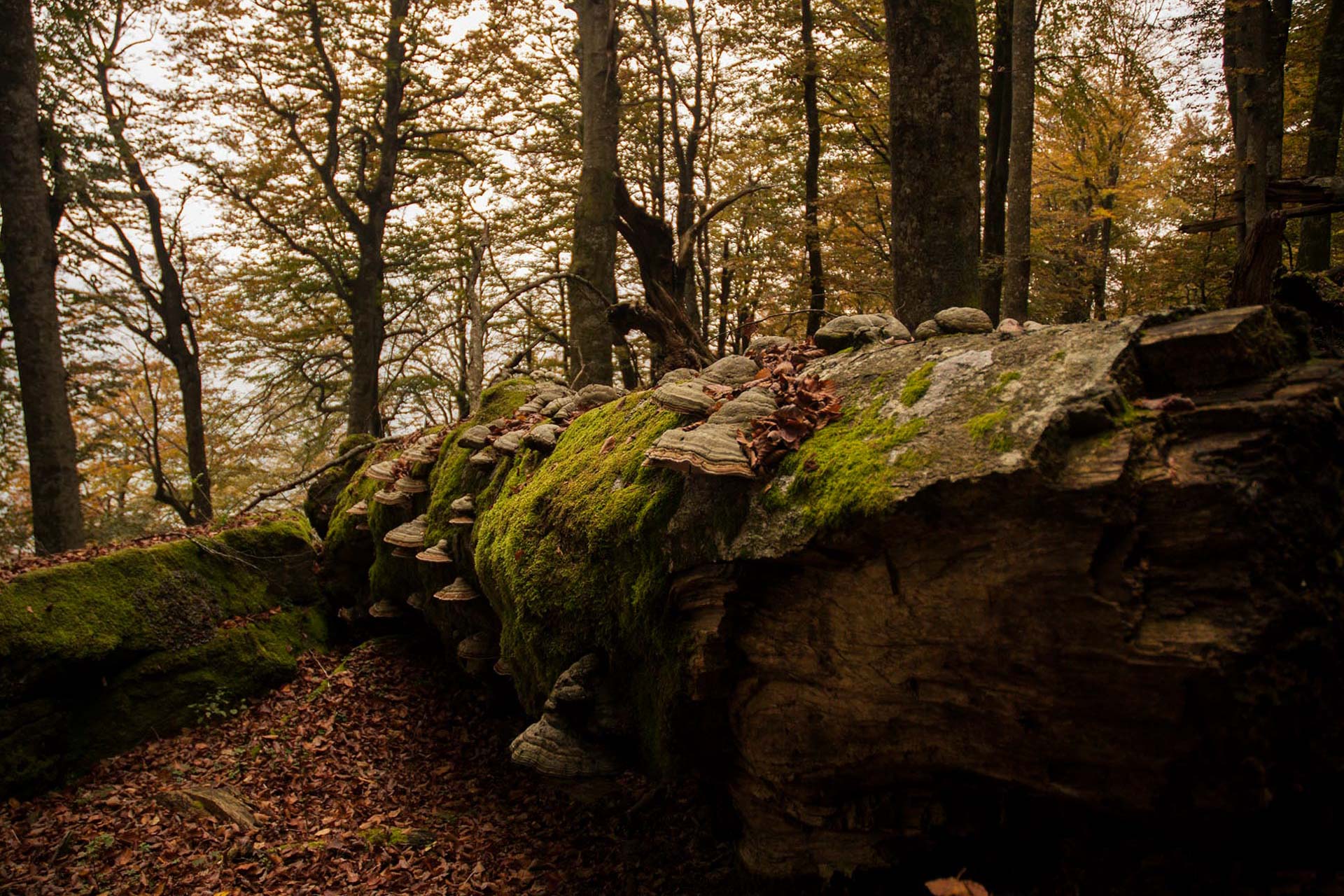 The tree bark is the outermost layer of trees, through which they interact with the surrounding environment. Besides, it protects them from water loss and from parasites, pathogens, and predators. It is constantly evolving and, especially in intact forests, is often home to an amazing variety of organisms and microenvironments.

The bark of the Beech Tree is rather smooth surfaced, especially in young specimens, and grayish with horizontal markings due to epiphytic crustose lichens, that is lichens simply growing on the surface of other plants, without taking nutrients from them.

However, in mature forests, it is not rare to find centuries-old beech trees whose bark is thicker and rougher, with knots, fissures, and cracks especially in the lower trunk, and even the variety quercoides, recalling the trunk of an oak for complexity. It’s exactly thanks to this variety of recesses and fissures that several forms of life can develop: among the others, mosses, fungi, and lichens.

In beech forests, a characteristic fungus is the parasitic Fomes fomentarius (commonly known as hoof fungus). This species produces large fruit bodies which are shaped like a horse’s hoof growing on the tree bark and continues to grow for a long time also on dead and fallen trees, changing from a parasite to a decomposer.

Another great protagonist of the complex beech forest environment is the lichen Lobaria pulmonaria, easily recognizable for its large, bright-green leaves which can reach a diameter of 20-30 cm. It is a bioindicator of environmental quality: in fact, this species is particularly susceptible to pollution and environmental alterations, and its presence in a certain environment means that the latter is particularly healthy and natural. Lobaria prefers old or very old trees, and its name derives from the resemblance of its thalli to lung lobes and from its alleged healing powers in the treatment of lung diseases.

If you look closely at the bark of beech trees, it won’t be difficult to see various animal organisms: gastropods, beetles, dipterans, and arachnids which inhabit the bark searching for food or shelter. Some of them, such as for instance some species of harvestmen and some moths belonging to the family Geometridae, are classic examples of crypsis, since they show colors which perfectly blend with the varied bark patterns.

In some spots, on dead or dying trees, the outermost layer of the bark can detach, revealing the fascinating drawings of the winding tunnels created by bark beetles. These beetles lay their eggs in the holes of the bark, and their larvae tunnel under it as they eat and grow. In turn, the gaps between the trunk and the detached bark can become further recesses colonized by other species.

In conclusion, a true labyrinth of biodiversity!